The tradition of the barber shop

If you walk along your local high street now or next time you’re visiting a hustling town, the chances are you’ll be seeing the red and white barber shop candy striped pole popping up everywhere and it’s about time too.

Most, if not all of the younger male population of today’s society get their hair cut either in a hairdressers, beauty salon or they do it themselves in the comfort of their home, and I also bet that to them a proper decent shave comes from Gillette’s finest triple headed hand-held blade and a soothing foam gel from a spray can.

But no more dodgy haircuts and dot to dot tissue paper face as the barber shop is finally here once more.

Right from the beginning

The barber and their traditions can be dated back to the bronze age (roughly 3500 BC) where they were referred to as gods and hugely respected by the Ancient Egyptians and Ancient Greeks.

Men would travel and gather in groups at their local marketplace to have their hair cut, their beards trimmed and neatened and their eyebrows shaped. They even had their fingernails cleaned and cut.

The barber gatherings weren’t just a place to go to be groomed, they were a place where the men could go and have a good old gossip and have healthy debates.

But that’s not all

Most barbers were also trained surgeons, dentists and doctors who would not only groom your head but would also perform surgery if the gentleman required and perform dentistry and other procedures like fire cupping, bloodletting and leeching.

To be a barber in those days was a highly paid profession, they got paid more to be a barber than an actual surgeon.

It wasn’t long before the word got out about barbering and Rome was the first city to open a barber shop.

Year after year, the barber shop gained more popularity and found worldwide fame and recognition, and soon the red and white striped barber pole became its trademark and even with the decreasing of the barber shop for many years over many decades, the striped pole remains the barber symbol right up to this very day.

The fall of the barber shop

The barber shop remained huge for many years and was popular not only for men but also for boys.

It was a tradition in many countries that to mark a boy’s coming of age, he would have his very first shave at the hands of a professional.

Upon the boy’s first wisps of facial hair, the father would take his son to their local barbershop.  He would be seated in the chair, and the chair would be raised up to the required height.

The barber would treat the boy to the very special experience of the cutthroat razor shave where the father would watch on in pride as he mingled with the other men waiting their turn on the back bench.

Sadly this year’s old tradition came to an end with the demise of the barbershop.

The demise of the barbershop

Just like today with our ever-growing technology, old things get phased out to make room for new and exciting, but not necessarily better things which is what happened in 1904 when Gillette marketed the safety razor.

Ok, so the safety razor was and still is a good thing as, to be frank, letting any untrained (and even a trained) hand lose on a throat can and was in some cases fatal.

Men have died just by having a shave, and I’m not just talking Sweeny Todd style.

Going to your local barber for a close shave was for most a pampering and soothing experience, where you come away with a face as smooth as a babies bum. However for a few, their last close shave sealed their fates with a devastating outcome.

Nowadays we have antibacterial creams, lotions and potions and you can’t walk down your street without a health and safety warning slapping you in the face.

However, if you were a bloke back in the good old days you were playing with your own fate when the barber took the razor to your throat.

Any tiny nip or cut could be lethal as infection was a huge problem back in those days. But for most, if they were unlucky enough to get an infection it would clear up within a few days or weeks, but not for all.

For some, a razor burn was their only worry.

Sepsis, blood poisoning and infections were common and even in one case Anthrax. One poor gent died when his trusty barber foamed up his face with an Anthrax contaminated shaving brush.

So when Gillette made the safety razor widely available, people snapped them up not only for their convenience but in fear of death by a barber. When the world war broke out, the troops were given the safety razor as part as their kit.

Men and boys went to war, and over the years the need for the barbershop slumped so low that many shut up shop and made way for the unisex hairdresser.

Men no longer had their very own male only hair emporium where they could go and kick back for a good man to man gossip, now they had to share this with their wives. 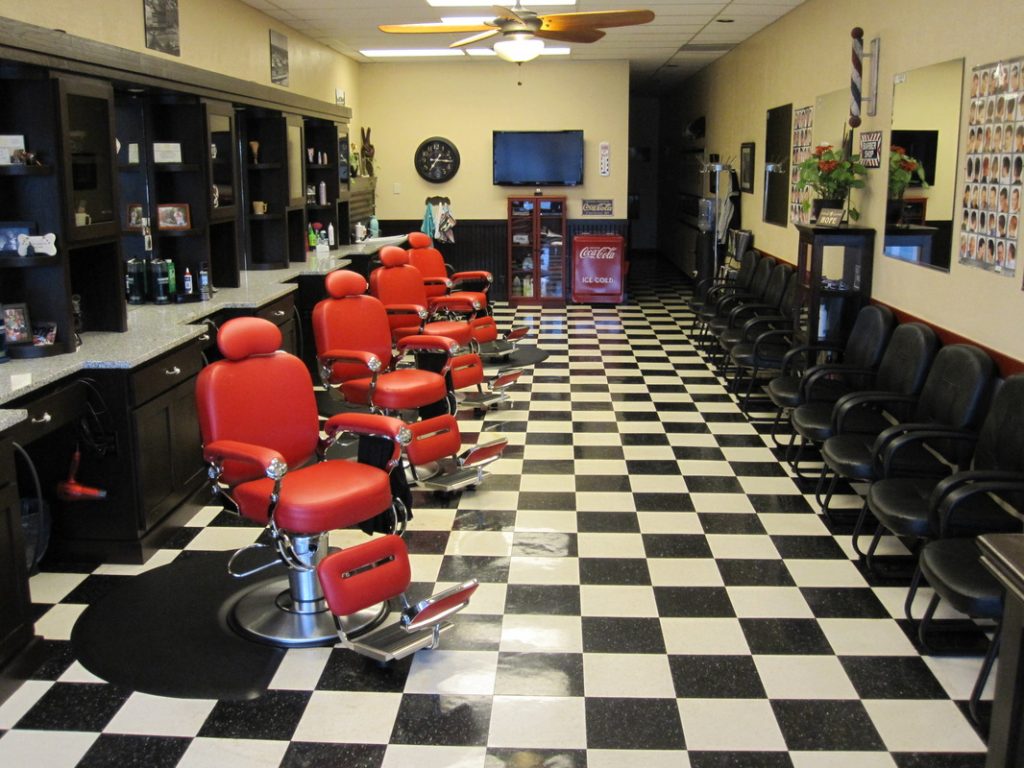 Getting your haircut at the hairdressers just isn’t the same and here’s why.

Not all hairdressers can cut mens hair. Barbering is a totally different kettle of fish when it comes to men’s and women’s hair. And yes the hairdresser is very good at colouring, perming, updos and styling, but to cut a gentleman’s hair the correct way?

A proper barber has been trained in the fine art of cutting with a razor.  Whereas most hairdressers snip away with scissors and comb. That’s not saying that if your hairdresser,  you can’t barber but not all can.

A barber shop is a man’s world. You won’t find any woman there wanting to chew your ear off about holidays or your kid’s school. Just sit back and dont say a word, if you wish or you can talk man talk.

Where else can you go and have a real cut throat shave with foam that’s applied by a facial brush? Who else can trim the bushy eyebrows without frowning upon you?

A barber knows what a man wants, and a barber delivers.

So why not try out a barber near you.